Close
Thank you! Your submission has been received!
Oops! Something went wrong while submitting the form.

Are you or a loved one living with COPD or Asthma? Sign up below if you would like the chance to test the BreatheSuite device
‍* MUST be a resident of Newfoundland & Labrador

Thank you! Your submission has been received!
Oops! Something went wrong while submitting the form.

The High Costs of Uncontrolled Asthma 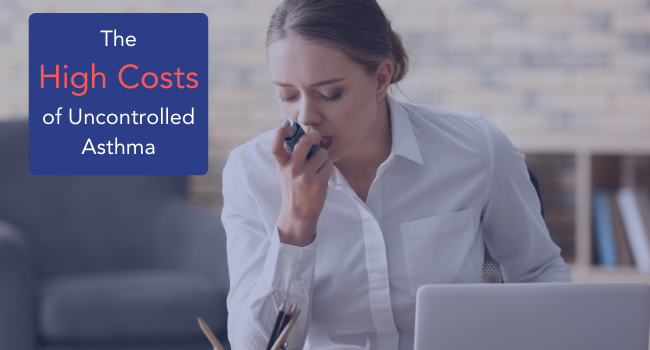 Asthma is a disease that affects over three hundred million patients worldwide [1]. While the condition is not curable, it is highly treatable - primarily through the use of inhaler medication. Despite the treatable nature of asthma, it remains incredibly costly and continues to negatively impact the health of millions of patients. Poor asthma management has been linked to a high prevalence of symptom flare-ups, which in turn cause direct increases in local ER visits and medication expenses [1].

Given the number of patients who routinely rely on their inhalers, it’s surprising that 90% of patients do not take their inhaler doses correctly [2]. Reasons for poor asthma control can range from a failure to adhere to scheduled inhaler doses, poor inhaler technique, and an inability to avoid allergens.  Regardless of how one’s condition is triggered, it remains an unfortunate fact that the prevalence of these exacerbations has both a high medical cost and a negative impact on the patient’s overall health.

The high incidence of uncontrolled asthma and the financial impact it can create has been the subject of study for several industry leaders - including  BreatheSuite’s advisor, Dr. Mark Fitzgerald. He sought to calculate the direct cost of poor asthma control over a 20 year period from 2014 to 2033 [1]. The study also attempted to quantify the number of quality life years lost as a result of uncontrolled asthma - expressed as quality-adjusted life-years (QALYs).

From 2014 to 2033, the total undiscounted direct costs and QALYs lost associated with sub-optimal control in asthma were $24.40 billion and 1.82 million years respectively. This also accounted for the 16% expected increase in the number of Canadian asthma patients during this time frame [1].

Interestingly, the same study also analyzed a parallel scenario in which poor asthma control was reduced by 10% over the same period of time. The research showed that this small change would aid in saving Canadian patients a total of $42 billion in direct and indirect costs and 295,000 QALYs across 20 years [1].

A similar study focused on the US and sought to quantify the same variables from 2019 to 2038. The results of this study found that the total cost of poorly controlled asthma across the 20 year period totaled over $300 billion USD. With the inclusion of indirect costs, these figures increase to more than $950 billion over 20 years. Furthermore, total quality-adjusted life years lost among American patients were projected to an excess of 15 million years across this same time period [3].

From this study, it’s theorized that the optimum control of asthma can cut these 20-year total costs by a significant percentage. In fact, when the total estimated undiscounted direct costs of asthma, across all levels of control, are accounted for, these costs can be reduced by as much as 20% [3].

It’s important to remember that these figures are estimations based on set future conditions - but the fact remains that uncontrolled asthma does and will continue to be reported at increasingly high levels. In order to reduce the impacts, patients are encouraged to work on getting their asthma to a controlled state through increased inhaler medication adherence and improved inhaler technique. For more on inhaler adherence and technique check out this article!

Back to Newsroom
Cookie Notice
Please know that cookies are required to operate and enhance our products and services, as well as for advertising and analytical purposes. We value your privacy. If you are not comfortable with us collecting and using cookies, please review your settings before continuing.
Our Privacy Policy
This is some text inside of a div block.
Accept