Close
Thank you! Your submission has been received!
Oops! Something went wrong while submitting the form.
Now
FDA
Cleared

The Importance of Inhaler Technique for Respiratory Patients 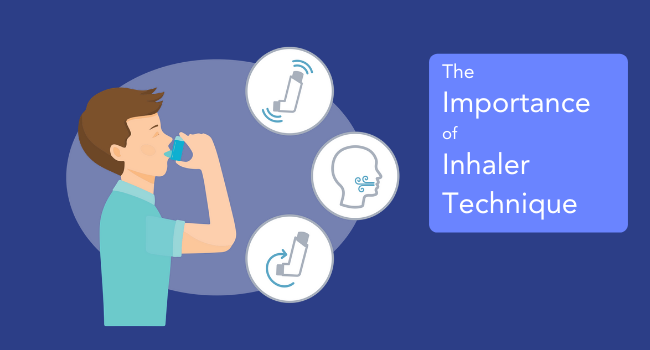 Asthma and Chronic Obstructive Pulmonary Disease (COPD) are two of the world's most common respiratory diseases, affecting over 300 million patients globally. To combat the symptoms of these conditions, including acute flare-ups, patients use inhalers to administer medication to the airway. The advantage of using inhalers is the speed at which medication is able to reach the targeted area - the lungs. Metered Dose Inhalers (MDIs) are the most commonly used inhaler, thus these small devices have become one of the most widely known healthcare devices available. Yet, what many don't know is that over 90% of inhalers are used incorrectly [1], [2].

While inhalers come in many forms, poor inhaler technique has been consistently reported across all types. This poor technique leads to a severe reduction in the amount of medication reaching the patients’ lungs. In fact, incorrect inhaler technique has been found to result in less than 20% of the intended dose of medication reaching patients' lungs [2]. Even though inhalers have been prescribed to respiratory patients for decades, there has been little improvement made to patients' overall technique, no matter which type of inhaler is used [1].

Given the effects of an incomplete dose due to improper technique, it's crucial that patients are educated on the proper use of inhalers. However, even with initial training, research has shown that a gradual regression in patients' technique over time is very common. Thus, to keep the inhaler technique and medication dose consistent, it is recommended that inhaler technique training be conducted routinely [1].

Despite this obvious need, an overwhelming number of asthma and COPD patients have reportedly never received instruction of any kind [3]. This has led to healthcare professionals asking how inhaler technique can be managed.

BreatheSuite is on a mission to solve this problem. Our integrated platform utilizes an inhaler add-on device to give patients real-time feedback on their inhaler technique. Our devices measure inhaler shaking and orientation, inhalation duration, and coordination of inhaler usage. Users are then provided with technique scores based on these measurements. The regular feedback provided from the BreatheSuite app is designed to improve patients’ technique and adherence.

The BreatheSuite MDI is manufactured in such a way that it remains attached to your inhaler, for easy and automatic tracking and evaluation of every dose. All of these features combined allow BreatheSuite’s platform to train and empower respiratory patients to take control of their condition and manage their symptoms. Patients also have the ability to produce reports that can be shared with their circle of care. Physicians and other healthcare practitioners can use these reports to create customized, data-driven care plans for each patient.

For more information on BreatheSuite’s devices, including notifications on when they’re available in your area, contact us at team@breathesuite.com or click the Contact Us button at the top of the page!

MEET WITH US TO LEARN MORE

Click Here!
Thank you! You can now downoad our Case Study!
Oops! Something went wrong while submitting the form.
Back to Newsroom
Cookie Notice
Please know that cookies are required to operate and enhance our products and services, as well as for advertising and analytical purposes. We value your privacy. If you are not comfortable with us collecting and using cookies, please review your settings before continuing.
Our Privacy Policy
This is some text inside of a div block.
Accept