Close
Thank you! Your submission has been received!
Oops! Something went wrong while submitting the form.

Are you or a loved one living with COPD or Asthma? Sign up below if you would like the chance to test the BreatheSuite device
‍* MUST be a resident of Newfoundland & Labrador

Thank you! Your submission has been received!
Oops! Something went wrong while submitting the form.

The Saharan Dust Plume & its Impact on Asthma and COPD 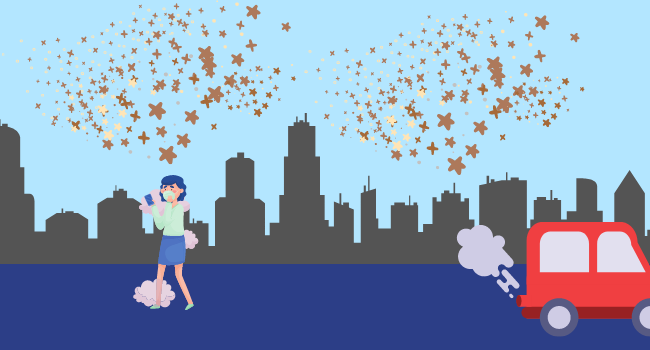 This summer, cities across North America have reported large clouds of brown dust which have resulted in hazy skies, bright sunsets, and dangerously poor air quality. These dust patches were a result of this year's unusually large airborne weather phenomena known to most as the Saharan Dust Plume.

The plume is a near 5000-mile long dust cloud that crossed the Atlantic in just a matter of days - carried by strong ocean winds. The dust cloud is part of an annual weather cycle in which desert dust particles are blown in large cloud-like patches over the Atlantic. High desert winds sweep harmful particles of dust up into the atmosphere, where they gather as a cloud-like plume and blow across the Atlantic. These dust plumes are a natural weather event that cool ocean temperatures and act as a suppressor of Atlantic hurricanes that plague Western coasts in the late summer.

What sets 2020's plume apart is its density - it's layers are so thick and tightly packed that it managed to remain intact for its entire journey. Usually, these dust plumes break apart and disperse well before reaching land, but according to Jason Tackett, research physical scientist for CALIPSO at NASA’s Langley Research Center in Hampton, Virginia, this year’s dust plume is the largest in decades [1].

The dust cloud nicknamed “Godzilla” by NASA scientists observing it, set off from the coast of West Africa on June 17, and its first flyover occurred less than a week later on June 23, followed by another the following week. New Orleans, Atlanta, and Orlando are just some cities in the Southern United States which reported such patches of brown dust above their skylines. A third, albeit predictably less serious wave, is now projected to sweep over Central America, with this plume's northern tip expected to yet again fly over some of the same areas of the Southern United States [2]. To see the plume’s path yourself, check out this video data captured by NASA [1].

What does this mean for Asthma patients?

The main effect these dust clouds have is a drastic lowering of local air quality. While the main layers of the plume begin about a mile above ground level, harmful desert micro-particles are still prevalent below this level. These particles can linger around the ground level and irritate the eyes, nose, and throat of a person, regardless of any predisposed condition. Furthermore, as the plume is a natural layer of atmospheric insulation, summer's heat and humidity are elevated in the areas it covers. The combination of airborne dust particles and humid heat means that these dust clouds can be especially irritating to patients with asthma, COPD, and strong Allergies [3]. Researchers expected the arrival of these plumes to lead to a direct correlation in Asthma and COPD attacks. As the third wave of dust plumes are expected to arrive in North and Central America next week, patients should be cautious of these environmental implications and stay inside. It’s recommended that patients have the inhalers on hand for emergencies and review your doctor-approved dose adherence schedule. For more information on the common Summertime causes of asthma and COPD exacerbations - check out this BreatheSuite blog!

Back to Newsroom
Cookie Notice
Please know that cookies are required to operate and enhance our products and services, as well as for advertising and analytical purposes. We value your privacy. If you are not comfortable with us collecting and using cookies, please review your settings before continuing.
Our Privacy Policy
This is some text inside of a div block.
Accept